Photos by Rachel Greenberg
I am the author of three books of poems,  The Farm Wife's Almanac, Evening Chore, and The Harmonist at
Nightfall: Poems of Indiana.  These books, as well as an unfinished manuscript of poems in the
voices of various men and women from Indiana history, reflect my interest in exploring the Indiana
landscape and finding connections between the past and the present, either in terms of public history or
memoir.

I was born in the Mennonite community of Goshen, Indiana and grew up near Markle, a small town
along the Wabash River, in Wells and Huntington Counties.  My father, Gerald Miller, worked as
a family physician and my mother, Mary Mishler Miller,  contributed her leadership skills to
many community projects such as editing the town's monthly newspaper and planning the annual
town festival. My father and I write about the healthful advantages of living in a place where people
feel connected in our book, Making the Rounds:  Memoirs of a Small-Town Doctor.

The year I turned thirteen, my family moved to the Horn of Africa so that my dad could assist a
​  Mennonite mission hospital in need of a doctor.  Somalia was where I first started writing  poems--"pecking out / poetry on a manual typewriter with sticky / keys that left smudges around the letters."  I wanted to describe the guban--the desert area that surrounded our village. It was a desolate but beautiful landscape where Somali nomads herded their camels and carried their houses, where thorn trees bloomed in the rainy season and baobabs spread root-like branches.  I didn't know it then, but Somalia is a land of poets.  A traditional coming of age rite for both young men and women has involved memorizing poems from its rich oral tradition and composing new poems. I collaborated with my father in a book that celebrates many aspects of Somali culture, while also describing the events that unfolded when one of his patients died during surgery.  That book is entitled A Hundred Camels: A Mission Doctor's Sojourn and Murder Trial in Somalia.

Back in Indiana, the ten-acre woods where I had grown up seemed more mysterious than I remembered. I started searching for similes and metaphors to describe what I saw and felt.  My English teachers at Norwell High School emphasized the importance of descriptive details that appealed to the senses, and a Poet-in-the-Schools gave me a valuable introduction to the elements of poetry writing.  At Goshen College I studied with Nicholas Lindsay, a poet and carpenter. Like his father, Vachel Lindsay, Nick emphasized poetry's connection to song. His workshops had the feel of a poem; he'd sing our lines to chords on a guitar or connect them to fairy tales or myths.

After college I worked for the Clifton-Choctaw of Louisiana as a Mennonite volunteer, researching the tribe's history for federal recognition and tutoring school children. I was amazed by the way stories linked the Clifton people to their landscape--to natural springs, trees, old houses, certain curves of the road. There were Civil War stories, family stories, ghost stories, and folktales.  By the time I left the Clifton community, its piney woods and swamp had become a landscape filled with meaning for me.

Eventually, I left Louisiana to attend the M.F.A. program at IU-Bloomington, where I studied poetry writing with Philip Appleman, Yusef Komunyakaa, Roger Mitchell, Maura Stanton, and David Wojahn. While in the program, I also had the good fortune to meet my husband, Chuck Wagner, another M.F.A. student. Chuck currently teaches creative writing and literature at Brebeuf Jesuit Preparatory School, while I write at home and teach part-time for the Indiana Writers Center, IUPUI's Religion, Spirituality, and the Arts Seminar, and the theopoetics program at Bethany Seminary in Richmond, Indiana.  Over the years, I've taught creative writing and literature at universities, grade schools, libraries, senior centers, and community centers.

My husband and I have two daughters who also write poetry--Vienna and Iona. The entire family went with me on journeys that began with a 2001 Creative Renewal Fellowship from the Arts Council of Indianapolis. During summers and weekends we took trips to historic sites and parks throughout the state, and then I wrote poems inspired by those visits and my research. My years in Clifton gave me the impetus for this project. I wanted to feel more intimately and imaginatively connected to the Indiana landscape, as well as preserve stories that are in danger of being lost.  The Harmonist at Nightfall grew out of this project.

Although the speaker in my most recent book of poems, The Farm Wife's Almanac, is a fictional character, many of her stories harken back to stories from my family tree. I peeled, sliced, and simmered these accounts, adding this and that, till they turned into something new, like the fruit preserves in the farm wife's larger. I am therefore indebted to my extended family, the dead and living, for the harvest I gathered to fashion those poems.

Chuck and I are empty nesters now.  We reside, with our Siberian cat, Ninotchka, in Westfield, north of Indianapolis, in Hamilton County. Cool Creek Park is nearby and so is the Monon Trail. 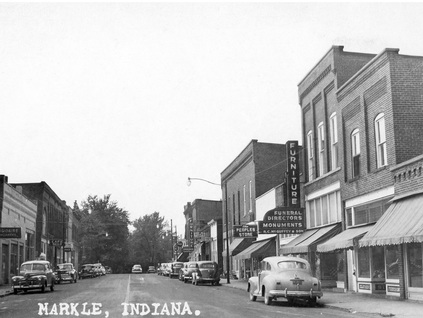 This is a view of downtown Markle in the 1950s. In the 60s and early 70s, my father had a doctor's office on this street.
​To find information about my publications and awards, read sample poems, and learn about any upcoming classes with the Indiana Writers Center or IUPUI's  "Religion, Spirituality & the Arts" seminar, visit my personal website at www.shariwagnerpoet.com.

These sites have information about me, as well as background on other Indiana poets:

Karen Kovacik, Indiana Poet Laureate 2012 and 2013, writes about my work in No More Corn: Indiana's Laureate on Hoosier Poets, November 2013.

Here are some articles about my Poet Laureate activities: